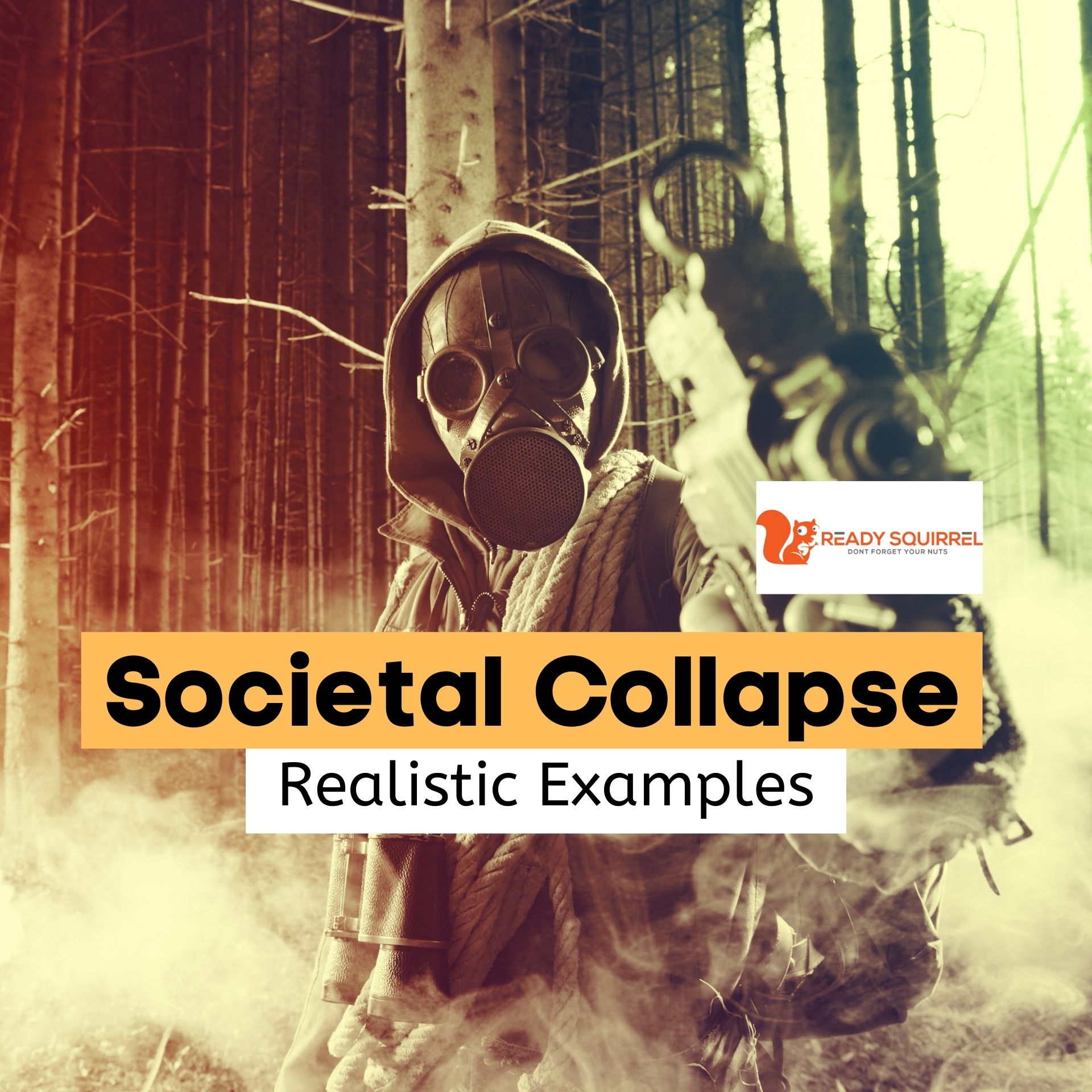 You can’t get more realistic Societal Collapse Scenarios than the ones listed below. Why? Because they are real scenarios. The examples aren’t the zombie apocalypse but they might as well be when you look at the death tolls from war, famine, disease, genocide, and poor living conditions.

Because my writing leans towards survival and emergency preparedness I’m not so much concerned with the societal collapse in the hew of “a disappearance of a society” but more the quality of life, personal freedoms, and the ability to plan for the future.

Many of the social and political issues we face today can be directly connected to societal collapses throughout history.

The most important concepts for society are the hope for the future and personal freedom.

Venezuela was a Spanish colony from 1522 to 1830 dependent on agriculture and rife with political instability and poverty.

Today, Venezuela is arguably the poorest country in Latin America even though it has the largest oil reserve in the world, even bigger than the Middle Eastern countries.

In the early twentieth century, the discovery of oil replaced agriculture ushering in a new industrial class that accumulated power and wealth selling oil to the world.

In the 1950’s…Venezuela was at its peak, with the fourth largest per capita Gross Domestic Product in the world.

Venezuela’s economic boom attracted laborers from Italy, Portugal, and Spain. This period of capitalism and relative prosperity extended into the 1970s.

As the state became more involved in private enterprise the country slowly slid towards socialism.

The nationalization of the oil industry was presented to Venezuelans as cheap gasoline, free education, healthcare, and an array of other public services.

Taxes triple and national debt skyrockets due to an array of give-away social programs.

The political class embraces deficit spending; because it gets them elected.

Venezuelans love the new “social programs so much they vote for communism.

Chavez promises to take money from the rich and give it to the poor. His political platform focuses on the evil Empire, the United States. For Chavez the kingdom of God on earth is socialism.

Chavez is held in high esteem all over Latin America.

In the ’80s oil prices plummet.

Venezuela’s economy crashes. The private sector is decimated from state intervention so there is no economic resiliency and nothing for the economy to fall back on for future growth.

Outcome of Societal Collapse In Venezuela

According to Bread.org, more than 5 million people have fled Venezuela, and 91% of those remain to live in abject poverty. More than 9 million Venezuelans are food insecure or malnourished. Venezuela is teetering on the edge of famine.

Modern Chinese history is somewhat hidden, but the cracks are wide enough to show how terrible things can be when human rights don’t exist.

China is an Orwellian society where thought and action are controlled.

There is no personal growth, freedom, property rights, or hope for the future except for a select few.

One does well in a communist or totalitarian regime at the expense of their fellow countryman. (This behavior would be considered stage 5 collapse.)

In 1949 Mao Zedong takes over as the Chinese Communist Party (CCP) chairman and rules until his death in 1976.

In 1958, Mao implements a campaign to shift China from an agrarian economy to a communist-based society.

The program is called the Great Leap Forward. It causes the largest famine in history accompanied by extreme violence and crimes against humanity.

2+2=5, no it doesn’t. You’ll be tortured until you feel it to your core. 2+2 is 5 if the state says it is so. Manipulating reality isn’t just a way to push a narrative it is also a method of psychological control.

If you sit in a free country like I do you may not recognize just how state-run terror affects a country over multiple generations. For a more obvious example see the Korean collapse below.

Between 1958 and 1962 Forty-five million Chinese die from starvation, state violence and overwork.

Is China in an ongoing state of collapse? If I was the average Chinese citizen I would feel like I was living in hell so I’d say yes. Take a look at some basic human rights violations committed by the CCP on a regular basis.

Because of the draconian imposition of the Versailles peace treaty at the end of World War I Germans have a sense that they are fighting for their existence.

On June 28, 1919, The Versailles peace treaty ended World War I, effectively crippling Germany. Forcing the country to give up territory in Belgium, Czechoslovakia, and Poland and cede all of its overseas colonies to allied nations.

The treaty forced Germany to become a Republic instead of a Monarchy and demanded that Germany pay for the entire war to the tune of 132 billion gold marks.

To pay off the huge debt, The Weimar Republic prints Deutsch marks that are not backed by gold or silver. This leads to hyperinflation. The value of the currency plummets, eventually becoming worthless.

By the time Hitler becomes Chancellor in 1933, 6.1 million, one in three Germans are unemployed.

On top of this, the United States calls in international loans because of the Great Depression, which destroys German industry and collapses the economy.

In reality, the Treaty of Versaille mandated massive reparations that were punishment for losing the war. The punishment took a once-proud nation and humiliated them. It destroyed the nation’s identity and paved the way for Hitler to gain power.

Germans began to lose faith in democracy and look to extreme parties on the both the Left (the communists) and the Right (the Nazis) for quick and simple solutions. When people are unemployed, hungry and desperate, as millions were in Germany between 1930 and 1933, they often turn to extreme political parties offering simple solutions to their problems. Between 1930 and 1933 support for the extreme right-wing Nazis and the extreme left-wing communists soared.

By 1932 parties committed to the destruction of the Weimar Republic (democracy) hold 319 seats out of a total of 608 in the Reichstag, with many workers turning to communism. The real beneficiaries, the Nazis.

Get ready for the collapse, learn how to choose a bug-out location. Check out the Ready Squirrel article, Societal Collapse: Guide To Picking a Bug Out Location

The Ottoman Empire is one of the biggest longest-lasting empires in the world’s history. It was an Islamic-run superpower that ruled large areas of the Middle East, Eastern Europe, and North Africa for 600 years.

What caused the demise of the Empire?

WWI was the major event that pushed the empire off the wall but there were also ethnic and religious tensions boiling under the surface. Once the empire broke apart roving bands of army deserters turned into criminals and roamed the countryside pillaging.

Armenian Genocide: The systematic mass murder of 1.2 million ethnic Armenians (the ethnic cleansing of Christians) by the Islamic Turks to create an ethnonational Turkey. 31 countries have recognized this purge as genocide

genocide definition: the deliberate killing of a large number of people from a particular nation or ethnic group with the aim of destroying the nation or group, “a campaign of genocide”

The original solution to the “Armenian Question,” was mass deportation but the effects of marching men, women, and children across the desert of Syria with no food or water had the desired effect.

200,000 Turkish Women and Children were forced to integrate into Muslim households.

For every soldier who died in combat or from wounds, two soldiers died from diease.

North Koreas’ present border with South Korea was established in 1950. The Soviet Union controlled the North and The United States Controlled the South.

Today North Korea is a Dictatorship with totalitarian rule based on a socialist state.

You could also call it communist totalitarianism with one political party and one leader who considers himself a god and requires that the population worship him.

North Korea remains economically and culturally isolated to maintain control of its population. There are no human rights and no freedom.

The Korean leader today, Kim Jong-un is an imposed god to North Koreans. The country isn’t really a country it’s a cult. Kim copied the bible and replaced himself as the savior.

As a foreigner, you can’t speak to the population unless they are approved by the government.

If you don’t have a good social status you can’t go to the capital city of Pyongyang. Pyongyang is a city set up like a movie set. It is shown to foreigners and is not like the rest of North Korea.

Over a period from the ’50s to today certain words are no longer a part of the North Korean vocabulary, it’s not just that people are afraid to say them. The words don’t exist.

Check out Yeonmi Park’s video. She escaped from North Korea and explains how the word love doesn’t exist.

18 Indications that North Korea is in a constant state of Collapse.

The collapse of the Soviet Union was hastened along by the inability of the Marxist or communist system to account for human nature.

Lack of incentives for productivity

Workers don’t get paid so they don’t work

In the 1980s, 50% to 70% of GDP supported the Soviet military. Increases in the military budget cause underfunding of the soviet economy.

Due to Military expenses,

There was a visible decline in the rate of growth, then its complete stagnation. There was a drawn-out, deepening and almost insurmountable crisis in agriculture. It was a frightening and truly terrifying sign of crisis. It was these factors that were crucial in the transition. [societal collapse]

The progressive system of socialism in the Soviet Union was feudalism. There were no personal freedoms for the average soviet. The wealthy elite was directly tied to the core of the soviet structure with militaristic leanings.

The overall efficiency of the Soviet System was poor. The Soviets mined eight times as much iron ore as did the United States but yielded only 3x as much pig iron for manufacturing and twice as much steel.

The average soviet was a serf provided with basic necessities like food, shelter, clothing, transportation, and medical care but little else.

NKVD internal policy towards enemies of the people. An unknown number of persons were sent to Gulags or re-education camps. Hundreds of thousands are executed.

Fragility and Hunger In Venezuela, bread.org

link to Storing Rice In Mylar For Long Term Storage

Using Mylar for storing polished rice long-term is hands down the best method of keeping rice for a maximum thirty-year shelf-life. I say this from the point of view of a person who does their own...

Dry beans are a core survival and emergency food because of their nutritional value and long shelf-life. When combined with a complimentary food like white rice, another survival food legend, they...